Although Red Tiger Gaming is rarely mentioned in the same breath as developers like Playtech, NetEnt, Betsoft, and Microgaming, it is still considered one of the most exciting creators in the industry.

In fact, the Red Tiger Gaming logo is one of the most instantly recognisable in the iGaming sector and is growing in popularity every year.

What is Red Tiger Gaming?

Red Tiger is a licensed iGaming developer that creates premium real money games for casinos all over the world. It is owned by NetEnt, a favourite amongst many players, but it continues to operate independently and create titles with its own unique spin.

In addition, and as we shall discover in this guide, Red Tiger works with NetEnt to adapt and improve some of its most popular licenses.

Take a look at our list of iGaming developers to find more creators like Red Tiger Gaming.

Red Tiger Gaming has licenses from some of the biggest regulators in the world, allowing its games to be played in hundreds of countries and on most continents.

The biggest of these licenses are provided by the following:

Red Tiger Gaming has a growing selection of premium slot machines. Some of these games have been created in combination with other top developers and many explore unique themes, graphics, and features.

In many ways, Red Tiger reminds us of the exceptional creators at Yggdrasil Gaming. It is not afraid to try something new, ensures that all of its games look great, and dips its toes into history and fantasy every now and then.

Also, just like Yggdrasil, and unlike many other creators, it is not too heavily reliant on licensed slot machines. Instead of borrowing recognisable trademarks and copyrights from TV, film, and video games, it relies on topical themes, popular trends, and the restoration and improvement of classic slots.

If it had a favourite subject, it would probably be fantasy, and fairy tales in particular. There is something about these stories that Red Tiger loves, as it has used a multitude of them throughout the years.

Gonzo’s Quest is one of the biggest games in the online slot sector. It’s one of the most popular slots created by NetEnt, and everyone in the gambling industry has played it or knows about it.

You might be wondering what that has to do with Red Tiger Gaming. Well, this developer didn’t have a hand in creating the original Gonzo’s Quest, but it did launch Gonzo’s Quest Megaways.

This game adds a fun mechanic to a beloved game and creates the perfect combination. It is a mash-up of three different developers: Big Time Gaming licenses the Megaways mechanic, NetEnt owns the game, and Red Tiger worked its magic to bring everything together.

If you’ve never played a Megaways slot before, you’re missing out! This feature adds a completely randomised number of paylines to each spin. There are multiple reels and rows and these align to create a varying number of paylines, covering anything from just a couple of dozen to over 100,000, depending on the slot.

All of the action takes place in the base game, but you can also find a multitude of additional features, including wild symbols, wild reels, colossal symbols, Free Spins, and much more.

It’s a polished slot with 4050 Megaways and a theme based around super-rich swine living in grand mansions, driving flash cars, and showing off expensive jewellery. It’s odd, it’s unique, and it’s also brilliant.

The Rocket Men slot proves just how fun and irreverent Red Tiger can be. It’s one of our personal favourites and one that we would recommend to all real money slot fans.

The game is based around Donald Trump and Kim Jong-un and was launched when tensions were high between Trump’s America and Jong-un’s North Korea. Thankfully, those tensions died down and without meaning to get political, it’s fair to say that the threat of the US getting involved in a nuclear trade-off has diminished as well.

Still, this game is a great representation of the relationship shared by these two unhinged world leaders and gives some insight into a pre-pandemic, pre-Biden world.

We love a good Halloween-themed slot and Lucky Halloween definitely fits the bill. The star of this slot is a motorbike-riding, leather jacket-wearing jack O lantern. Everything has been steeped in a dark blue colour and there are many purple accents, all of which helps to add warmth to the game.

Snow Wild and the 7 Features

We can’t decide whether this name is ingenious or cringe, but in any case, it’s definitely unique and the slot itself is well designed. This 3D slot is themed around a rock band and its titular frontwoman. There are guitars in the background, tankards of beer on the reels, and a fantasy element throughout.

Red Tiger Gaming has dabbled in table games but it hasn’t quite committed to this genre. At the time of writing, there are just three table games listed on the Red Tiger website.

These include a variation of Blackjack, Roulette, and Baccarat.

You won’t find anything special here. The games are pretty standard and while they do look good, they’re not overly impressive.

If it’s table games you’re looking for, check out our page on the best Playtech casinos. These guys know how to create a good table game and have a wide selection for you to peruse. 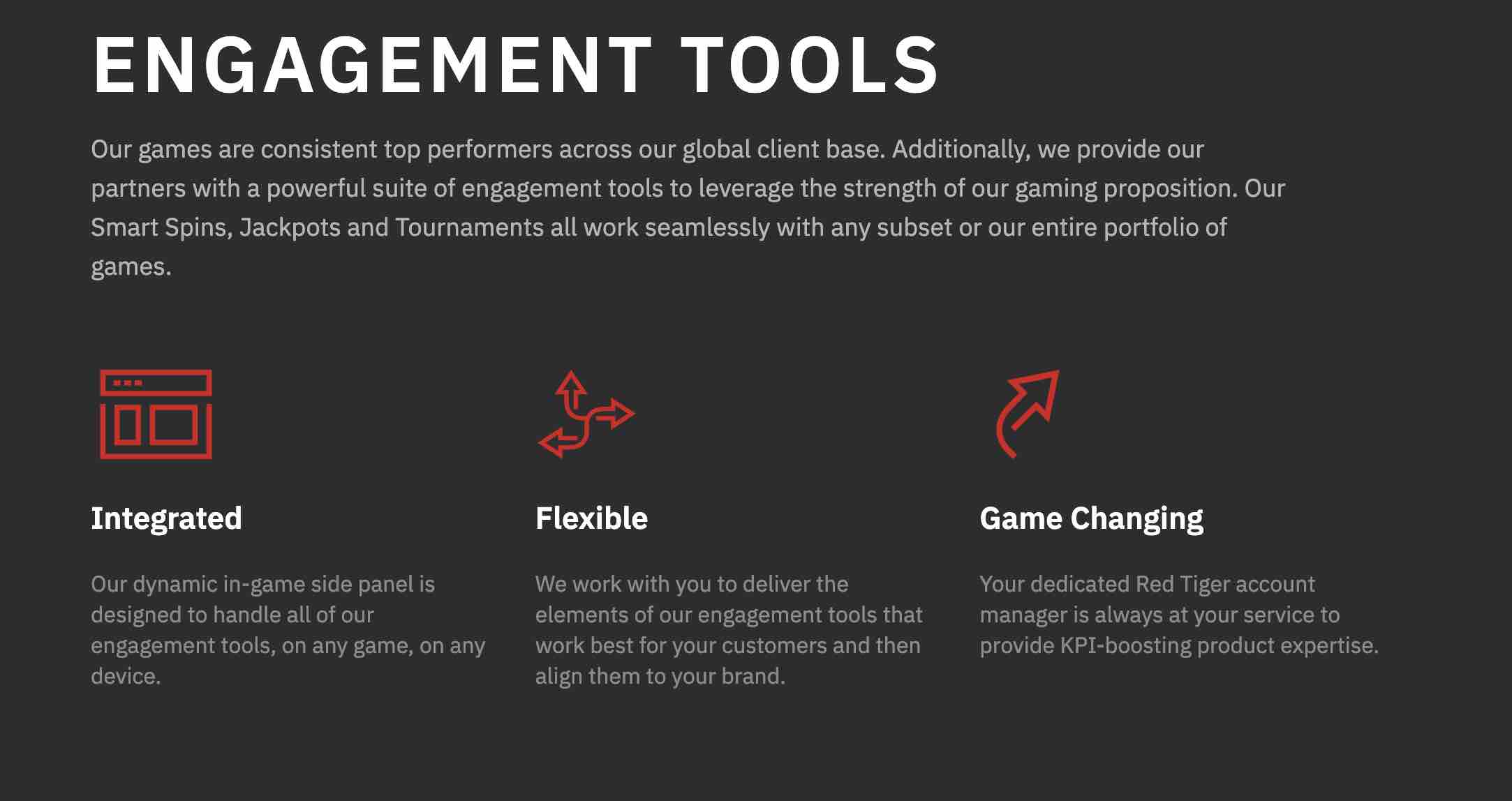 Where to Play Red Tiger Games

We have listed the very best Red Tiger casinos on this page. As Red Tiger isn’t a major developer and doesn’t have a wide selection, it’s never the main provider, and you’ll often see it listed alongside the likes of Playtech, Microgaming, and NetEnt.

But that’s good news, not bad, as it means its games are included on a wide range of online casinos, including those regulated everywhere from Canada to the UK and those using everything from Bitcoin to PayPal.

If you’re just looking to play a few quick games and see what all the fuss is about, visit the official Red Tiger website. It hosts all of its games and lets you play them without signing up or making a deposit.

Usually, you need to jump through a few hoops to play slot machines for free, especially if you’re located in the UK and other strict regions. There are loading issues, verification issues, and a host of problems that mean you give up long before you take your first spin.

But with Red Tiger, we didn’t experience any such issues and were able to play straight away.

Red Tiger Gaming offers a few unique features, helping its games to stand out from its competitors and ensuring casinos can keep those player number and retention rates high.

In addition, Red Tiger Gaming makes it easy for casinos to monitor activity, automate development processes, customise promotions, and more. Of course, they’re not the only ones doing this, but each creator has its own unique approach and this is always designed to make life easier and business more profitable for the casino.

Like all good developers, Red Tiger audits its games for fairness and uses advanced random number generators to ensure that every spin is fair and every outcome is completely random.

These payouts are fixed by the developer and cannot be changed by the casino. In other words, if a casino hosts games from providers like Red Tiger, you know they are fair and random.

Red Tiger has a license from the authorities of the United Kingdom, but that doesn’t necessarily mean you can play there. Just because a casino is licensed in the UK doesn’t mean it will automatically host games from Red Tiger.

The casino needs to work with the developer directly or host its games via a white label provider. To determine whether a site has Red Tiger games or not, look for the logo on the bottom of the webpage or check the games room and search by provider.

Alternatively, you can just stick with the casinos listed here, as all of them have been vetted by our reviewers and are guaranteed to have Red Tiger games!

The US has some of the strictest gambling laws in the developed world and these complicate things when it comes to hosting games from licensed developers. Some developers have licenses from recently regulated regions like Pennsylvania and New Jersey, and this gives them some traction in the country.

However, if the casino is licensed in Curacao or Malta, it may still provide games from this creator and others like it. That ensures the games will be fair, but it doesn’t make the same guarantees for the casino.

If anything happens and you lose your money, Red Tiger can’t help you. You can take your issue up with the regulator, assuming there is one, but that is a contentious issue. Caution is advised when you’re playing online casinos in the US, especially if those casinos are not located in licensed states and tied to regulated casinos.

At the latest count, this creator has over 40 titles, but the developer’s roster is growing all of the time. For comparison, Microgaming has well over 500, but there is a huge difference in size between these two. It also has nearly two decades more experience and used that time to create many of its games.

For a brand that was launched as recently as 2013, 40+ titles is still an impressive feat.