The Evolution Of Online Poker

Russ “Dutch” Boyd was one of the first people to discover real money online poker. Dutch and a number of other people discovered in 1997 that there was an online gaming company called 2AM games that allowed players to play online poker as well as Roulette for cash. Originally, there were not many games to choose from – with 2AM Games only allowing players to play Texas Hold ‘Em, a far cry from the myriad of cash casino games available to the modern day player.

Playing poker for play chips (prior to 1997) was not in a fact a new experience, though. There were a few websites offering multiplayer poker – for example IRC poker, just with no cash changing hands. Despite the lack of money involved IRC poker still built up a huge great community of players, with many people becoming online poker enthusiasts.

IRC (internet relay chat) is an online communication tool that allows various people across the internet to talk to each other in a number of different channels. This is in an era even prior to the AIM chat rooms everyone knew – IRC was a place where many of the poker world’s top players got together and played, frequently discussing poker terms and strategy as well as hand histories.

There were two games established in the room, a limit hold ‘em 5/10 game, and a no-limit hold ‘em 5/10 game which required a minimum buy-in of 2000 estherbucks. If you busted out of the no-limit game, you would have to start again grinding up through the 5/10 limit game. The skill levels in the no-limit game were actually very high, with many players playing solid poker in order to avoid grinding through the limit game to get back up to the more respected no limit table.

2AM poker came in and changed everything however. 2AM poker offered players the chance to play with 1000 play chips, much in the same way as IRC poker’s 1000 estherbucks system worked. There was a key difference though. Each player that managed to build up more than 1 million chips was given $100 USD, in real tender. Russ Boyd earned around $1,000, by reaching more than 10 million chips – however 2AM quickly covered up this loophole, and made it so that players could only earn $100 once.

After 2AM poker, came Planet Poker, launching on January 1st 1998 – the first poker room offering real money poker online as we know it today – with a $3/$6 limit hold ‘em game. The table had 10 seats, but being the first real money poker room online, it struggled to stay anywhere near capacity, frequently running short.

It wasn’t in fact until February that a game even ran overnight, due to the number of times the software would break. Players were concerned about the security and fairness of the game, coming out with all sorts of speculation that Planet Poker was in some way rigged. In order to combat the speculations appearing and people’s fears about online poker, Planet Poker published their deck shuffling algorithm. There was an immediate problem surfaced unfortunately, with technically minded people studying the algorithm and realising that Planet Poker only allowed for 200,000 possible shuffles, a tiny number compared with the (2^226) possible combinations possible from a proper deck. Players built a program that used information from the table in order to work out which of the 200,000 states the deck was most likely in. When given 2 hole cards and a flop, the software could work out what the opponents and, and what would come on the turn and river with virtually 100% accuracy.

Fortunately, the team published their findings rather than using it to profit – and worked with the Planet Poker team to rectify the problem. Planet Poker developed a more secure shuffling algorithm, but unfortunately they never recovered from this massive mistake, and faded away. After Planet Poker’s failure, a new company, Paradise Poker, saw an opportunity to capitalise on Planet Poker’s mistakes and the blow to their reputation, by starting their own online poker room. They exploited google PPC marketing to ensure that anyone who was searching online at the time for “poker” was shown the Paradise Poker ad. Paradise offered many games, hosting hundreds of different players at any one time, with stakes up to $20/$40. Demand for online poker was skyrocketing, and one particular table frequently had a waiting list of over 40 players.

Alongside this, and seeing the success of Paradise Poker, Dutch decided to start his own poker room, called PokerSpot - with an $80,000 investment from friends and family. The money was not enough, and it was clear he was in way over his head. PokerSpot frequently had software problems, and was filled with bugs – staff were also very difficult to get hold of. Cashouts solutions were very slow, often taking months to arrive, and eventually due to bad management, PokerSpot was unable to pay-out its players at all – losing around $400,000 in player funds.

After PokerSpot began the generation of poker we all know and love today. In the summer of 2001 three poker rooms were born that would change online poker forever. What were their names? Ultimate Bet, Party Poker and PokerStars.

Glossary for playing poker at the casino

Skill Vs Luck at Online Casinos

The Evolution Of Online Poker 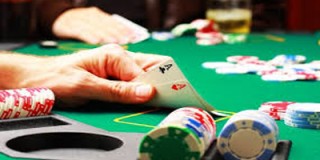